Case study:
A new era of positivity for Azzurri Communications

Home » A new era of positivity for Azzurri Communications 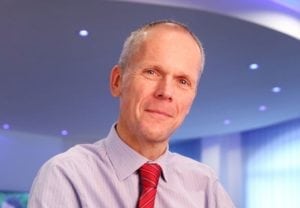 CCgroup helped us to understand where Azzurri could fit in our overcrowded cloud communications industry and how we could articulate that for best effect. The team’s advice and expertise were invaluable for us to build the reputation and relationships which secured our strong foothold in the market.

Azzurri Communications (now Maintel) needed to dispel a longstanding negative perception in the media and shift market attention to a new set of positive, differentiating messages.

Azzurri Communications had faced a challenging period that had been reflected harshly and unfairly in the media. Intense competition also meant that like many in its market, Azzurri struggled to differentiate itself.

The Azzurri board had recently appointed a new CEO to lead a new phase of growth for the business. It had also declared a pressing requirement to capitalise on its investments in a network of datacentres and the new services that they underpinned.

CCgroup constructed a set of individual messages for each audience that put cloud technology at the core of Azzurri’s service offering. This allowed Azzurri to lead the charge within the industry for Unified Communications as a Service (UCaaS), and differentiate itself from on-premise-only providers. This would instantly update Azzurri’s positioning, move them clear of their competition and give the company a new identity to accompany the announcement of a new CEO. All of this would serve as ammunition with which to counter the negative track record and maintain a steady cadence of positive news and differentiating thought leadership.

Before launching the press office, CCgroup then recommended a brave tactic: a media tour that would put the new Azzurri CEO and CTO in front of some of the same media who had recently been highly critical of the company.

Two full days of media and analyst briefings were secured for the Azzurri execs. Armed with the new positive messages of a refreshed executive team and a powerful differentiation, all resultant coverage reported a new era for the company and encouraged Azzurri’s audience to renew its confidence in the brand. This tour on its own represented a dramatic media coverage sentiment swing compared to the whole of the previous year.

CCgroup then sustained the momentum with ongoing press office activity. The regular drumbeat of thought leadership coverage across the business computing, channel and telecoms media reiterated the strong cloud and corporate messaging and successfully diverted attention away from the previous negative media coverage. Azzurri’s subject matter experts became regular commentators on UCaaS, cloud technology and enterprise collaboration in CIO-facing media. The press office’s performance also led to the CEO and CTO being frequently called upon by the media to comment on industry news and issues.

CCgroup then successfully repeated the media tour 12 months later to highlight the year’s positive growth and the fulfilment of the corporate goals laid out in the first tour.

The robust media activity and brand turnaround inspired managed communications provider, Maintel, to approach Azzurri for acquisition – a process that was completed in April 2016, just 18 months after CCgroup was first engaged. Maintel was particularly encouraged by Azzurri’s strong media positioning and vision for cloud in unified communications. To prove the point, CRN (a key UK channel publication) reported that, “Maintel approached Azzurri in a ‘pre-emptive strike’ to avoid losing out in a bidding war, and quoted Eddie Buxton, the CEO of Maintel, as having said Azzurri’s prowess in cloud was the key motivation for a deal… Azzurri was about 18 months ahead in its cloud story.

A clear example of precise messaging and strong media engagement combining to create a PR campaign with identifiable commercial benefits.