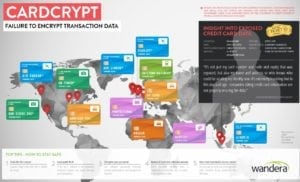 We needed to cement our position as a global leader in mobile data security, and the successful execution of this campaign achieved exactly that. This integrated campaign resulted in not only brand awareness and market credibility, but also directly led to new sales interest and traceable impact on our new business activity.

Wandera is one of the most innovative companies in mobile security and needed a brand position that mirrored its technological prowess. Through the CardCrypt Campaign, CCgroup cemented Wandera’s place in the global mobile security industry and most importantly delivered sales leads.

Through the international network of enterprise mobile devices that its unique technology scans, Wandera had detected 16 popular apps and mobile websites that were leaking unencrypted Personally Identifiable Information (PII) due to a single and common design flaw. This vulnerability was dubbed ‘CardCrypt’.

After notifying and working with the companies involved according to responsible disclosure, Wandera felt that it was very important to make users aware of the flaws so that they would not be at risk.

While the strength of the initial headline of poorly-designed apps leaking PII was obvious, CCgroup had to ensure that any press campaign would also deliver commercial impact in both the UK and the US. This meant that a message had to be constructed that not only made the most of a dramatic core story but also promoted the superiority of the Wandera platform and made the story relevant to the enterprise IT audience.

CCgroup and Wandera’s marketing team worked together to quickly build the materials for an integrated campaign, including press materials for the US and UK media, an infographic, blogs and a data sheet with details of the threats’ technical analysis which was made available on the Wandera website. All of these materials highlighted how the detection of these threats was only possible due to Wandera’s exceptional technology and emphasised the danger of these and similarly vulnerable apps to enterprises’ commercial data.

Social media posts were also scheduled in advance and supplemented with live updates, and an email campaign was distributed to Wandera’s customers, partners and prospect databases.

The press release was issued under embargo to key media contacts, including those who were already aware of Wandera through the extensive press office activity in the previous months. On the day of the story launch, the CCgroup PR agency fielded a high volume of inbound media enquiries, providing further comment and arranging multiple short notice briefings with Wandera spokespeople.

The campaign resulted in more than 80 primary editorial news articles, not including online reprints and syndications. Media interest and coverage extended beyond the target markets of the UK and US and into Asia and Europe. Major publications that carried the news included the Daily Telegraph, Fast Company, Computer Weekly, V3 and Infosecurity.

The campaign also resulted in an unprecedented peak of activity on the Wandera website – 58% more traffic than the next comparable event. Wide brand awareness and audience reaction was even evidenced by Google starting to offer “Wandera CardCrypt” as an auto-complete option.